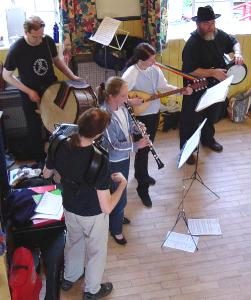 The “Vupros” music group was formed in 1994 by dance friends, mostly from the Marțișorul Romanian dance group and the Oxford Balkan dance group, to play for the Balkan evening dance at the Eastbourne International Folk Dance festival. The early programme drafts had a question mark in place of our band’s name so we started to use the Bulgarian for “question”, which appears unpronounceable in English when written in Cyrilic, Bbпpoc.

We played a combination of traditional Bulgarian instruments such as the Tupan (large drum), Darabulka (small drum), Tamboura (long necked lute) together with the accordion, clarinet, sax, electric guitar and electric bass. Our repertoire was based around dance music from Bulgaria with the addition of dance music from the neighbouring countries of Romania, Serbia, Macedonia, Greece, Albania and Armenia. Our last gigs for dance events were in 2009.