Possibly the second illegitimate son of a teenage mother, who a few years later marries just before a daughter is born.

My grandfather documented the family information that he was a “Woolcomber”, location Normanton and his name is on the wedding certificate for his son Christopher Davy and Rosetta Beech. Census data gives that he was born 1812, in Haverah Park, Yorkshire. He marries Martha Smith in 1837, and died 1878 in Wharfedale.

This page covers a possible parentage based on the only historical information that seems to fit the known facts. I would be interested if anyone else is researching the Davy and Simpson families from Oltey.

Haverah Park was a 12th century medieval park lying within the Forest of Knaresborough with a royal hunting lodge known as John of Gaunt’s Castle. From the late 18th century enclosure and by the 19th century it was an area of farming tenants on one of the few areas continuing the royal status and exempt from local taxes. There is no village or church in the park area.

The only documented christening of a Francis Davy is at is at Leathley, which is the closest village church to Haverah Park. Francis Davy – born 07-April-1812, christening 26-April-1812, mother’s name Mary and “illegitimate”. Possibly Mary was aged around 17 years if the later marriage is correct.

This also gives a possible younger brother christened at Leathley as Henry Davy, born 17-Feb-1808, christened 28-Feb-1808, mother’s name Mary and illegitimate, and does not give any profession for Mary, potentially Mary was aged 13 years.

Henry probably died 21-May-1813, aged 5 years. This is recorded in Otley suggesting Mary had possibly left her parents’ home at aged 17 and was now located in Otley, in the same town as her future husband.

There is no further record of “Mary Davy” in census or death data, so it looks most probably that she married Major Simpson in Otley 18-Feb-1817 aged 21. 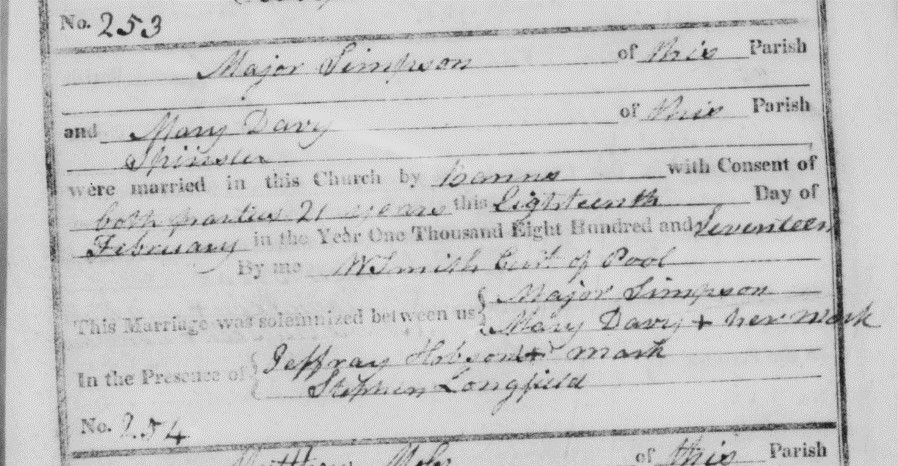 This gives her birth year as 1796, and Major Simpson as 1796, both residents of Otley. I cannot find a birth record for Mary Davy as the name is too common in the wider area without further information and there are no other Otley area possibilities. Birth records give Major’s christening date as 3-Aug-1794 making him 23 year at time of marriage, and his father was also called Major Simpson. Her marriage could explain how Francis found a good position in life as a “woolcomber” rather than ending up in poverty with a single mother.

Major Simpson and Mary have another child, Sarah Simpson born 17-Apr 1817 and christened 3-Aug-1817 so Mary was 7 month pregnant when they married. His profession is given as “Husband man”. One wonders if the previous sons were his, so was Major Simpson the father of Francis Davy?

Major Simpson marries again in 1823, marrying a Diana Weggen, a Londoner in Shoreditch which seems unusually far from Otley.

The question is what happened to Mary? There is no death record in the Otley parish. The options are:

Whichever option is correct it seems that she had separated from Major Simpson by 1823. If she had died in Otley while still with Major Simpson this would have been recorded in the home town of Otley.