The Kruggel family can be traced in Lutheran parish records back tot he mid 18th century in the village of Gross Mausdorf, in the then Danzig region of Prussia. 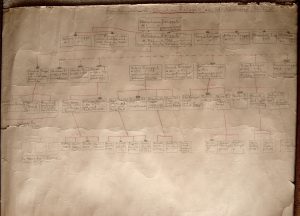 My first luck was that my grandfather drew out a family tree a long time ago which has the names back to Christian Kruggel and Marie Zimmerman, but without any dates or locational information.

My second luck is that the family were all Lutheran Christians from around 1770 and the parish records are available online (Ancestry.com) and the original records include exact details of parents, maiden names and often other notes. I had to read the original document texts, combined with my grandfather’s document and applying some logic to separate the various families in the neighbouring villages.

From this I have been able to construct the complete family tree. I see some other attempts on Ancestry, sometimes with mistakes in the older part of the family. I hope my tree is useful and interesting to other “Kruggel” descendants.

Very many Kruggel’s emigrated to Cleveland Ohio during the 19th century, and this is where the majority of continuing Kruggel family lines are now situated. My grandfather’s line moved to Germany to find a better life than being a poor farmer.

Kruggel families in the villages around Tiegenhof 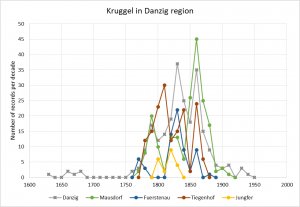 Lutheran records mostly start after around 1770. There are Kruggel recorded in Gross Mausdorf, Klein Mausdorf and the neighbouring villages (Fuerstenau, Jungfer) and in the town of Tiegenhof.

From the statistics it is clear that nearly all the active families had left the region (or left the Lutheran church) by 1890, but we can see from our family tree that emigration is the case. 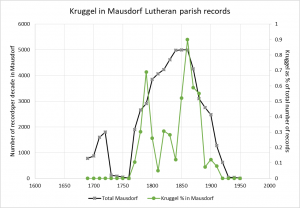 The majority of parish records for Kruggel in Mausdorf relate to our family, although there is another one generation family of Kruggel as well. We can see that Lutheran records started in the late 17th century, but without any Kruggel, there is a gap in data during the period of wars and upheaval, then records of Kruggel families start. There is a peak in records around 1850, after which the Kruggel records quickly reduce ahead of a general trend to zero by 1930. Note that “Kruggel” represents only 1% of available records.

Kruggel as a family name in a wider context 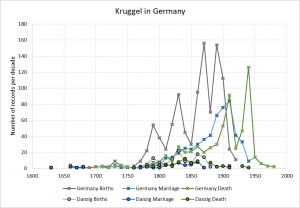 My grandfather was always proud of the double “g” spelling as a Prussian specific family name in this formally Danzig region.

Reviewing the available data it is clear that Kruggel (with double “g”) is also in wider German records, but a substantial proportion are in these villages around Tiegenhof, as well as early records in the area of old Prussia.

The origins of the Kruggel families around Tiegenhof

One might suppose the Kruggel families are immigrants after 1770, however this theory is not easy to understand by either the family name or the first names.

Firstly, throughout Germany the single “g” spelling and variants are common, whereas in these villages the double “g” dominates, suggesting existing families or an immigration from local families, rather than a general immigration from Germany (unless the Lutheran clergy had a spelling issue!).

Secondly the first name of “Christian” is too prevalent. Also the high frequency of “Jacob” and “Johann” is evident. 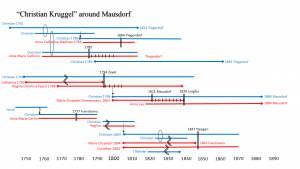 To investigate this, to determine how many actual individuals are represented by the records I had to connect the various independent death records, marriage records, and birth records, mostly with the name Christian, Jacob or Johann. This is helped as records include the mother’s maiden name in addition to the parent’s names. I worked on the premise that the least number of individuals and the simplest solution was more likely to be correct.

This yielded the founding Kruggel, at least in the Lutheran records, to be:

Four of the seven “founders” are named “Christian Kruggel” which tells us that either the first Lutheran records are from several families already using “Christian” as the first son’s name, or there was some changing of name on entering the Lutheran church.

Short history of the region

The people east of Vistula River were Baltic language speakers, many different tribes now are generally known under the regional names of Prussia, Lithuania, and Latvia. From the 6th century the region west of the Vistula River was part of the Slavic expansion to the coast.

The Baltics were conquered and subjugated by the Teutonic Order in the 13th century as a Roman Catholic crusade. The Prussian Baltic people appear to have been assimilated into the German population, with the language disappearing by the 17th century.

Politically the region divided in 1466 when four main cities wanted to align with the Kingdom of Poland (then a major power) and be released from the Teutonic Order. This is known as “Royal Prussia” (official language German and dominated by protestants in the Danzig area) and the eastern part became known as the “Duchy of Prussia” adopting Lutheranism in the 16th century.

The Vistula Delta seems to have been mainly low marshes and forests that were cleared with the help of Dutch Calvinists and Mennonites leading to an increasing protestant population from the 17th century. In 1773 was the beginning of the unification of Germany, from when the Lutheran church records of Kruggel start. It should be noted that there are also Polish names in the records and many Polish-German marriages. In 1945 the area was annexed by Poland and the population replaced by Polish people and Mausdorf is now known as Myszewko.