Major Simpson married Mary Davy in Otley 18-Feb-1817. I am related to the Davy family descended from Francis Davy.

Marriage record for 27-April-1823 in Shoreditch, London. They live in Otley and had four children with Diana, all born in Otley. 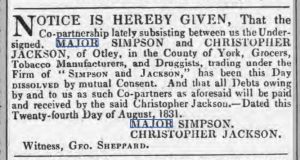 Between 1831 and 1834 his life seems to have difficult times. Jane is born in April and in August his grocers business partnership in Otley “Simpson and Jackson” partnership is dissolved, his wife Diana dies in February 1834 and he seems to have delayed christening Jane Jemina until October 1935 when she is aged 4, when he is re-married and the next child is christened.

Diana dies aged 30 and buried 27-Feb-1834 in Otley, so she was born around 1804. The only near birth record for Diana is Diana Waggon, born 1802 in Barking Essex, but this is 2 years difference in birth year and the wrong area of London.

Major Simpson marries Jane Bollans of York 19-Oct-1834 in Otley parish church. Major’s profession is given as a “grocer”. Jane was born 1807 in York, christened 18-Jan 1807 in York to parents Francis and Elizabeth.

Living first in Halifax they have five children.

Then in Horton (Bradford) another three children.

Following their parents deaths the family is headed by daughter Margaret Simpson, all living at Franklin Street, Horton, Bradford. John Simpson is married to Sarah Ann born 1849 in Horton with their children Charles M Simpson born 1870, Clara born 1873, Margaret born 1876, Mary born 1879. If this is “Frank Street, Horton” the houses are only two room back-to-back houses!