At Easter in 2013 we took part in a ‘fieldwork experience’ with the ‘ICTM Ethnochoreology sub study group for field research’ in the village of Svinița[1] on the Danube Gorge in southern Banat. This trip was organised by our Serbian colleague, Selena Rakočević, from the Institute of Musicology in Belgrade, with our assistance, and we were very honoured that our friend, the doyenne of Romanian ethnochoreology, Anca Giurchescu was able to join us.

As part of this trip we observed, and took part in, the custom of joc/hora de pomană during the ‘bal’ held on the second day of Easter. This experience led to our wider interest in similar customs that involve dedicating a dance for a deceased person. Our subsequent research revealed that this custom is still common in the area of the southern Banat mountains, the counties of Mehedinți and south western Dolj, in north eastern Serbia and northern Bulgaria along the Danube. 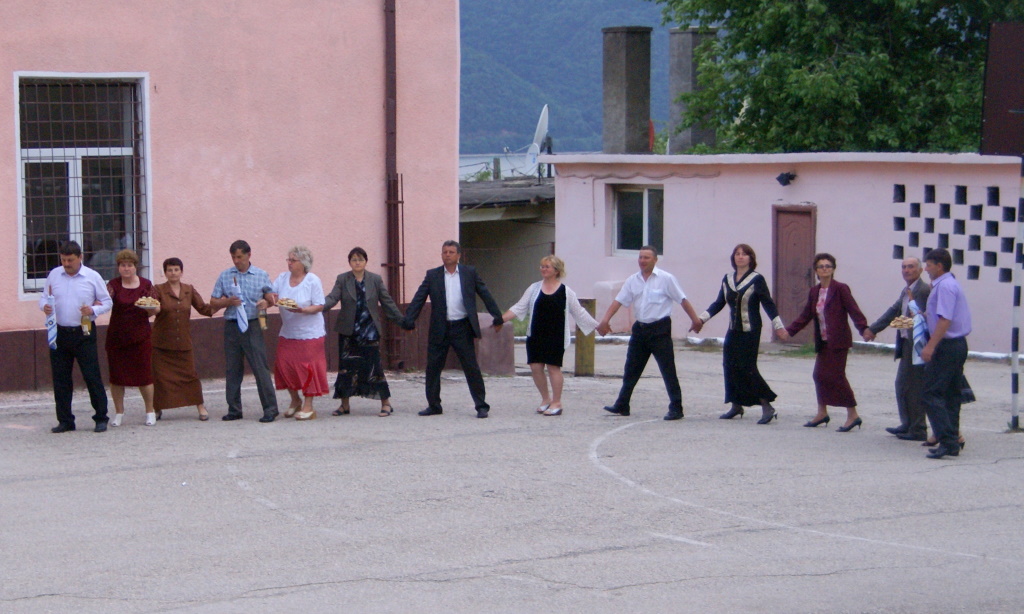 Beyond our fieldwork, our ethnographic research draws from informal interviews and personal communications, written sources, local on-line news articles, and an extensive (and ongoing) review of YouTube videos of local community events in Romania, Serbia and Bulgaria. This village by village YouTube search of events such as weddings, christenings and saints day celebrations has enabled the contextualisation of the elements of the ‘dancing for the dead’ customs within the local social dance repertoire. Following our observation that this can take place within many local bals, over time we have discovered that the inclusion of this custom is often not mentioned in the video titles but can be seen as part of the event. 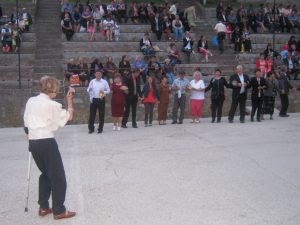 The custom of dedicating a dance for a person who has passed away usually takes place within, or at the start of, an existing social occasion that includes local music, song and dance. This custom often takes place during the celebration of the village saint (known as ruga in Banat), with the most common days being the second day of Easter or at Rusali (fifty days after Easter), or at local ‘bals’ held on other (non-ruga) occasions (as was the case in Svinita in 2013), but also can be included during life cycle events such as weddings or baptisms as a symbolic way of including a family member who can no longer be present.

Certain objects are integral to all rituals involving giving alms (pomana) to the dead such as candles to light the way to the other world and food and drink for the journey. For dedicating a dance to the deceased these props include candles and scarves, bottles of plum brandy and ritual bread (colaci) (sometimes with twigs or tree branches inserted in them), and sweet cakes with nut paste (coliva) or plates of homemade cakes.

The props are brought to the dance location in baskets by the female relatives who hand each participant a candle, and towels or scarves that the dancers hold between their joined hands while they dance.

In Svinița in 2013 three bottles of plum brandy (țuica), three plates of homemade cakes, and three bundles of candles wrapped in scarves were held by the key relatives, one of whom led the line of dances, the second at the tail end and a third in the middle of the line.

In certain locations in the Oltenian region of southern Romania and south of the Danube in north eastern Serbia this custom is more elaborate, in particularly on occasions where the deceased was a young unmarried person. Portraits of the deceased are carried by the mourners, and towels decorated with items that would be useful to the deceased in their afterlife, including food, sweets, small mirrors, ribbons, and various trinkets that are hung on poles making a vertical icon. 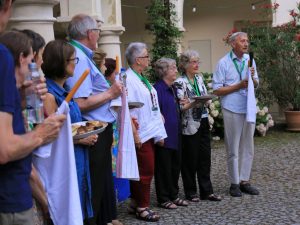 The dance or dances used for the custom of dedicating a dance to the dead are usually the first dance in the local community dance cycle from that particular region which is usually the slowest dance. In the Banat mountains this is often brâul, elsewhere is hora. After this dance is played the dancers stand still holding their lit candles and the musicians play a doina (known as doina de pomană) in memory of the deceased family member. Then as the song ends and the next tune starts the dancing recommences following the usual sequence of dances for the specific zone.

Our fieldwork and ethnographic research has identified locations where this custom takes place.

It is interesting for us that the custom appears to be both in the mountain areas of southern Banat, across the Danube in north east Serbia, and Mehedinti county, plus the Danubian plains in Timoc, southern Oltenia and northern Bulgaria. Regions that are most often considered as ethnographical separated as “Banat” “Oltenia” and “Vlach”. It is certain that there have been population movements over history, but there also appears to be an underlying unity, not only in this custom, but it is also in the form of the basic social dance.

Mellish, Liz (2014) An outsider’s view of an interethnic community in Banat: culture and identity in the village of Svinița. European Review of Applied Sociology, 7. Page 16–25.